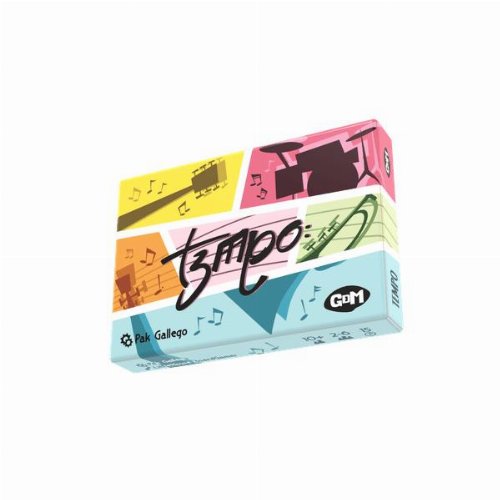 PRE-ORDER28 Μαρ
SKU: GDM2140
BARCODE: 652733104847
PREORDER: Product will be available at 28 Μαρ 2022 (121 Days) The availability date of the product is indicative and may be changed by the supplier.
In any case a possible change will be informed by email.
10,79€11,99€
Product price includes VAT
If you buy this product, you earn 12 points
In cart:
Available: 10+
Μηχανισμοί Player Judge, Singing, Turn Order: ProgressiveΚατασκευαστής GDM GamesΚανόνες ΑγγλικάΜέση Διάρκεια 10'Σχεδιαστής Francisco Gallego ArredondoΗλικία 10Παίχτες 2-6 players

Welcome to the unique show of Tempo, where your voice harmony, rhythm and melody will be the stars. Aren't you good at singing? Do you have no rhythm? Don't worry, it'll be fun!

Choose one player to be the metronome, they'll be in charge of keeping the tempo and dealing the cards.
The metronome chooses the cards according to their difficulty and shuffles them.
The first times you play, we suggest starting with value 1 and 2 cards.

The metronome deals one card facing up to each player and starts marking a time signature (one, two, three, four) repeating it throughout the round. This will mark the rhythm to follow.

After the first time signature (one, two, three, four) the rest of the players will sing the note on their card at the same time.

It the player has a (crotchet) card, it will last the same time that a number of the 4/4 time signature. A quaver will make us sing the two syllables in that same time, a triplet quaver, three and a semiquaver, four.

In each time signature, before number three, the metronome will give a new card to one of the players. Those will have to switch between their notes from now on. For each number of the time signature, they will sing a note. A player shall never have two cards more than another.

If at any time, the metronome detects a mistake, stops the song shouting 'TEMPO!'. All the players keep their card with the highest score, except the one who made the mistake, who gives their highest card to the metronome.

If nobody makes any mistakes and all the players get to sing their 4 notes during a time signature, each one keeps their card with the highest score and the metronome doesn't keep any.

The remaining cards are shuffled again and the player on the right of the previous metronome becomes the new one.

The game ends when all the players have played as a metronome once. The one with more points wins.