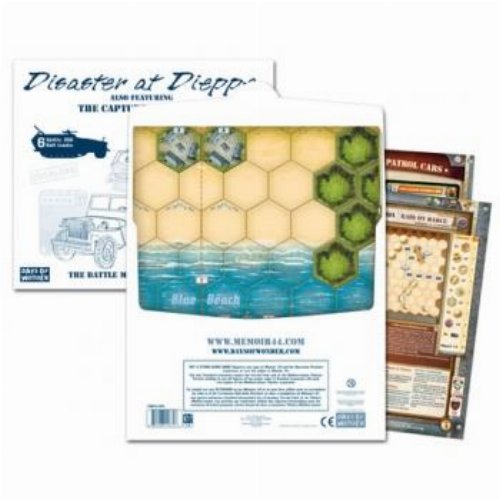 Disaster at Dieppe is the final installment in the first series of Memoir '44 Battle Maps that features two new, ready-to-play Overlord scenarios, new jeep and half-track figures, and four Standard scenarios: "Disaster at Dieppe" - A raid on the German-occupied coastal town of Dieppe, Operation Jubilee is an attempt to demonstrate the Allies capacity to seize and hold a major port for a short while; "The Capture of Fortress Tobruk" - June 1942; Hoping to avoid a repeat of Operation Crusader, Rommel relentlessly pushes his Afrika Korps after smashing through the British lines at Gazala in North Africa. The four Standard scenarios are: "Raid on Barce" and "Rommel's Right Hook", featuring the new jeeps as long-range patrol cars; and "Panzers in the Atlas" and "Le-Mesnil-Adélée", featuring the new Sd.Kfz. 250 half-tracks.

The Disaster at Dieppe Battle Map is an expansion and requires one copy of Memoir '44 and the Operation Overlord expansion, or two full copies of Memoir '44. Purists wishing to use all figures of the proper color in the Overlord scenarios will also need two copies of the Mediterranean Theater expansion.